To the newbie on the rugby pitch, the game can be a little tricky to follow. I’ve been spectating for a while now and still find myself asking, “What just happened?” Putting together this quick start guide – thank you Rugby Canada and World Rugby – helped with understanding the basics. Check the list of key terms included at the end of this article, if something you read needs a little more explaining.

Read Part 2 of the quick start guide for more information on playing the game – tackling, rucks, scrums, and lineouts.

Now channel a little Sean Connery Scottish burr as you read along – it makes it a little more fun.

The story goes that rugby was first conceived during a schoolyard game of football in England in 1823. It has continued to evolve into a game of honour and discipline with players very serious about respecting the laws of the game and each other.

The object of the game

The objective of rugby is to score more points than your opponent – sounds pretty straightforward. Essentially, teams work together to move the ball to find a player with free space to run, avoiding tackles, and touching the ball down in the opposing team’s end (dead ball area) to score a try. The team with the most points at the end of the second half is the winner.

The game of 15s is played with fifteen players on each side over two forty-minute halves. Players are always in motion with the clock running continuously throughout the match unless a penalty is called. It is a fast-paced, strategic game that is action packed from start to finish. 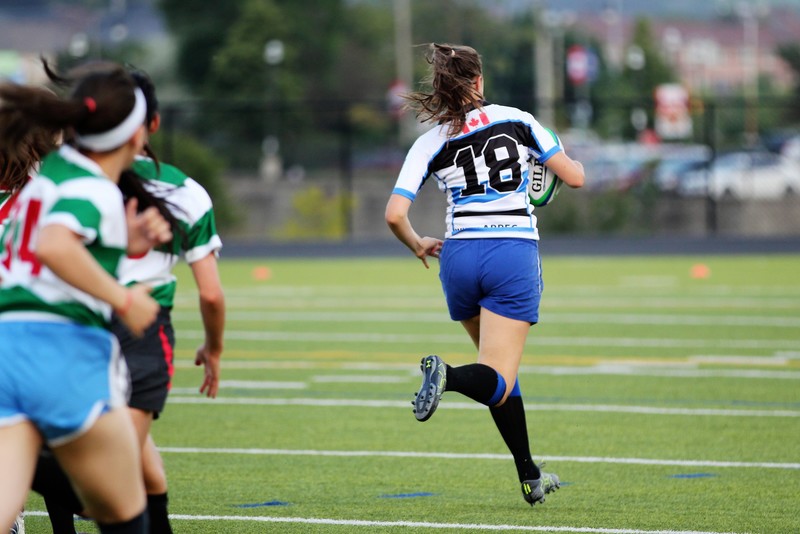 There isn’t much equipment required. Players are required to wear a mouth guard – mandatory for play. Cleats and team jerseys, socks and shorts make up the rest of the uniform.

The game is played on a pitch – a large grassy surface that is 100m long and 70m wide with uprights at each end of the field.

The rugby ball is similar to the North American football – just a little larger and without laces. 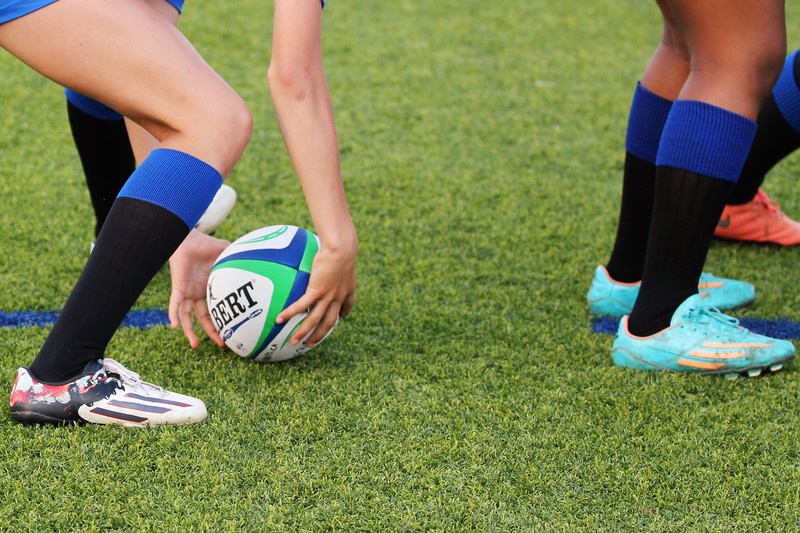 You’ll likely notice this first one right away. A distinctive feature of rugby is that the ball can only be passed backwards or sideways between team members – never forward. You have to pass the ball back to move it forward. If a forward pass is made, a violation is called resulting in a scrum to the opposing team (more on scrums in Part 2).

A second rule of thumb is to always stay behind the ball – or your teammate with the ball. If you are ahead of the ball and touch it, that results in being offside – and a penalty is awarded to the opposing team.

Recap: the two things to remember are pass backwards and stay behind the ball or the teammate with the ball. 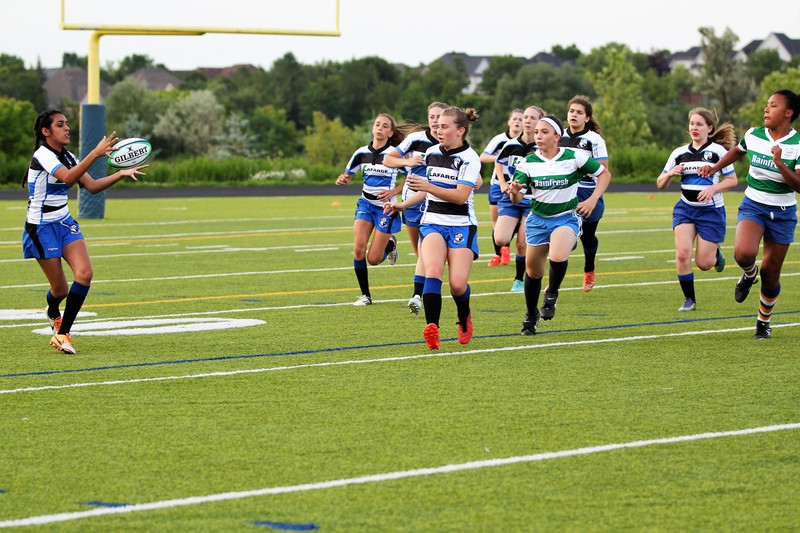 Scoring with a try

As mentioned, teams score by running the ball into the opponent’s end (the dead zone) and touching it down on the ground for a try. This is worth five points.

Scoring with a conversion

Following a try, just like in North American football, teams can kick – called a conversion – for two more points. The kicker sets up for the conversion perpendicular to where the ball was touched on the ground for the try. The ball must be kicked between the goal posts and above the crossbar to result in two additional points for the kicking team. 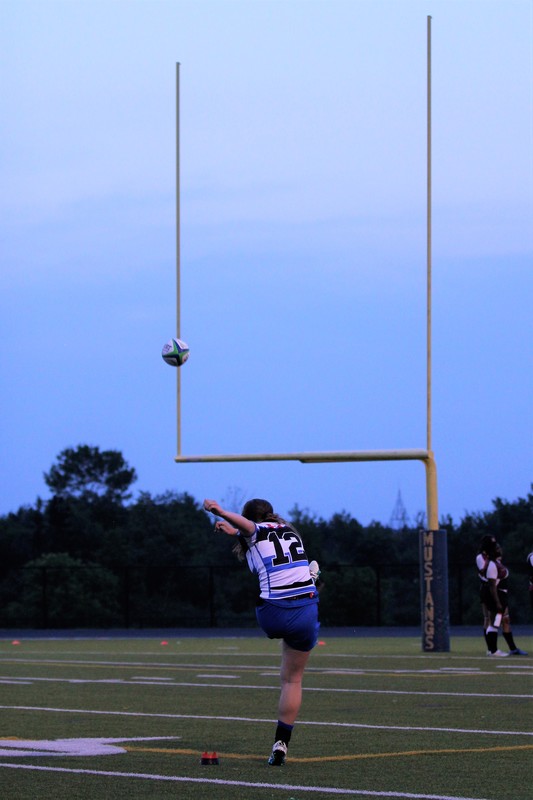 Scoring with a penalty kick

A team may take a penalty kick following – you guessed it – a penalty to the opposition. It is taken from the point on the field where the penalty occurred. If the ball goes through the goal posts, the kick is worth three points.

Scoring with a drop goal

A final way to score is a drop goal. This play is difficult and not used very often. During live play, a player can drop the ball to the ground and once it has landed, they can attempt to kick it through the posts. This is worth three points.

Now that you know how to score, you should know how to move the ball into scoring position. Teams can use any combination of passing backwards or sideways, or kicking and chasing to move the ball down the field. The idea is to use any of these methods to free up open space and get the ball to the dead ball area for a try. 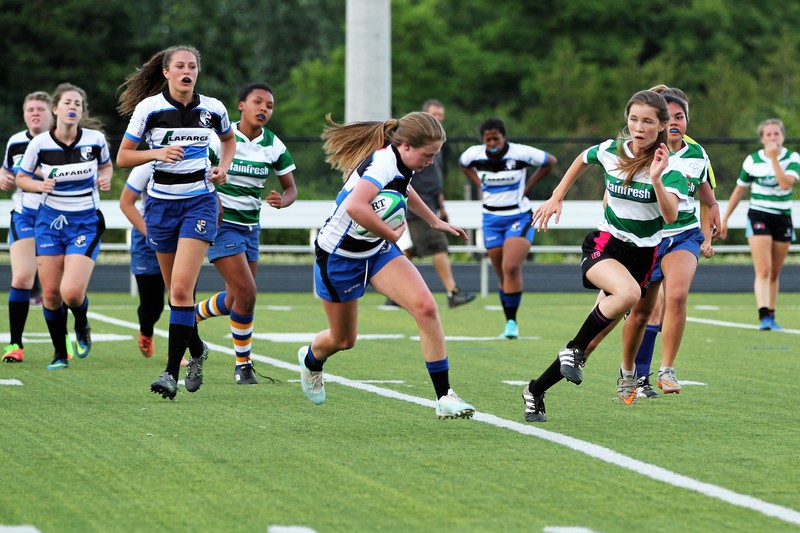 But passing isn’t the only game in town. Teams can also move the ball by kicking and chasing it inside the boundaries of the pitch. All players must be behind the kicker to be able to chase the ball.

One of the great things about rugby is that it is a game for everyone. The different positions require different skill sets making it possible for all players to find a way to contribute to the team’s efforts. There is a need for big players, small players, fast players and strategic players. Here’s a quick rundown of what you need to know about the positions.

In a game of 15s, there are lots of players and lots of action to follow. The names of the positions may sound a little different at first – scrum half, hooker (yes that’s for real), and prop. A handy piece of information is that the jersey number always refers to the player’s position…I did not realize that until I was a couple of seasons in (insert eye roll). This diagram will help you to visualize where players line up in a scrum.

Players 1 through 8 are forwards. These players tend to be the bigger, stronger, and heavier members of the team. Forwards typically use their strength and size to move and protect the ball – often times in short gains made against the opponents biggest, strongest, and heaviest members. These are the players that bind together in a scrum using their strength to get the ball.

Players 9 through 15 are backs. These players tend to be the faster, smaller, more agile members of the team. Backs typically use their speed and agility to find weaknesses in the opponent’s defence. These are usually the players running the ball into the dead ball zone for the try.

Rugby is a tough game. There is one rule that is important to remember and it is designed to keep players safe: “Be fair. Play fair.”

In the name of keeping the game safe, here are a few things players cannot do:

This article covered some key information on the basics of rugby. Check out Part 2 of the quick start guide for a little more information on playing the game – tackling, rucks, scrums, and lineouts.

Rugby Canada is the administrative body for rugby in Canada. Rugby Canada oversees the development of the sport in communities across the country and supports elite programs for prospering young players as well. Their website provides information on provincial unions, national teams, competitions, officials, safety, camps and clinics and much more.

The game of rugby is well represented in each of the ten provincial unions with more and more young girls and women playing across the country. Links to provincial unions can be found on the Rugby Canada site – or by clicking on the province below:

Provincial unions will have information on rugby clubs in your neighbourhood or follow this link on SeeWhatSheCanDo to find a rugby club in your community. 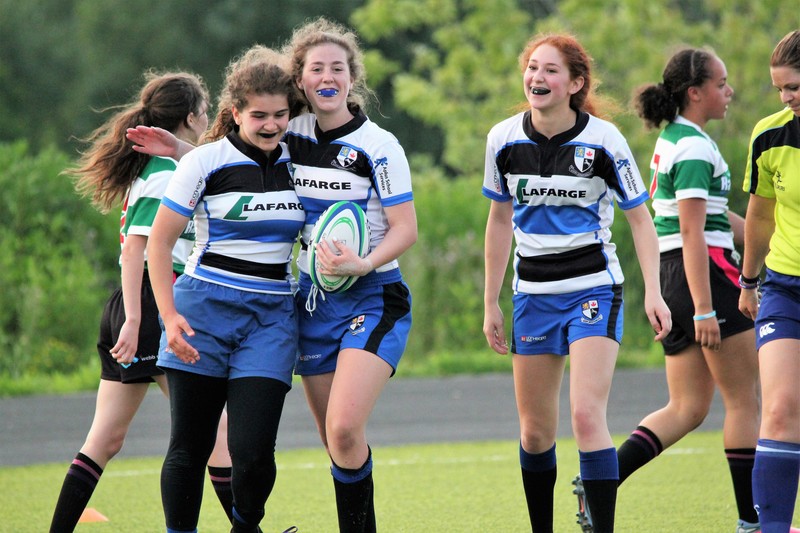 Check out Athlete Advisor, our online business directory for more information on rugby in your community. Find, rate and review rugby clubs, local community offerings and businesses that will help you do your thing!

Find an event or start a group on our SWSCD Hub. Check out Part 2 of the quick start guide on our Discover blog.

Do you have a good resource on the basics of rugby or a story about how the light went on for you? Tell us about your experience on our Inspire page.

Photos by Caroline Wiley. Caroline is the Founder of SeeWhatSheCanDo. Her world has always revolved around sport. Caroline's passion is moving, doing and photographing the active moments all around her. When she’s not making plays on the ice or actively exploring the world with her family, she can be found researching her genealogical history and immersing herself in all things Cornish.