Ready for a little more to whet your appetite for this fine game of rugby? Let’s give it a try – if you got the pun then you must have read Part 1! If not, read it here.

This article goes over a few more basics like starting the play, tackling, restarting and how possession is turned over. The list of key terms is found at the end to help out if something needs a little more explanation.

Reminder on the rules of thumb

Just a quick reminder on two things to remember: pass backwards and stay behind the ball or your teammate with the ball. 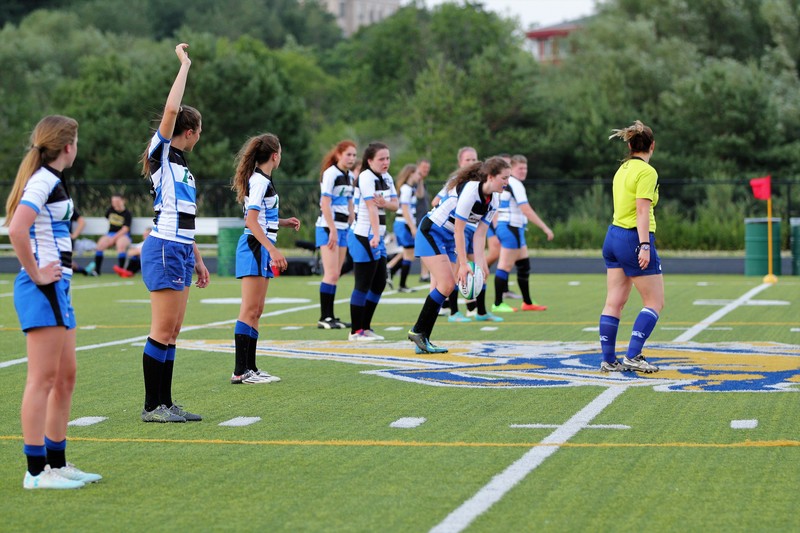 A kick off is used to start each half of the game and after a score. A coin toss decides who kicks and who receives. The ball must go at least 10 metres into the opponents end before play can continue.

A kick off is also used following a score. The team that did not score kicks to the opponent – giving the scoring team an opportunity and advantage to keep possession of the ball.

Once the match has been successfully started with a kick off, the next phase of the game is called open play. The ball is being passed or kicked between teammates and both teams are vying for possession of the ball. 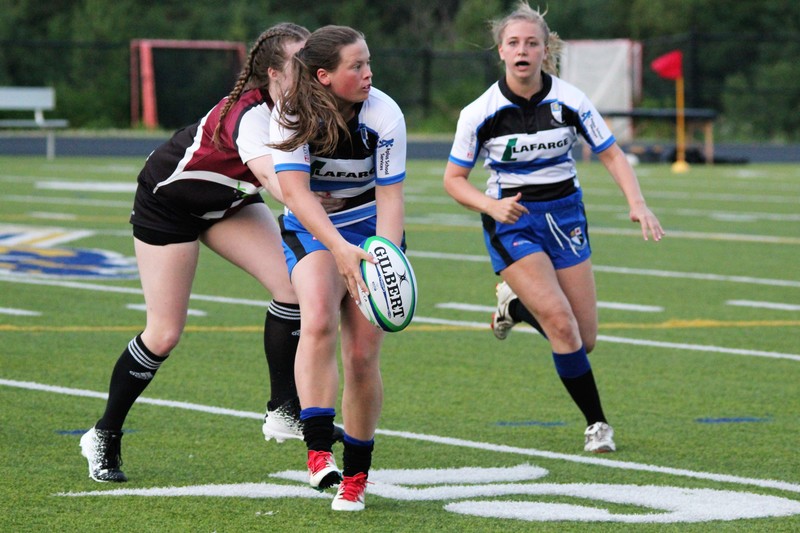 The objective during open play is for the team with possession to use various strategies to make space and get the ball to players who can continue to progress towards the opponent’s end resulting in a try.

Rugby is all about the contact so tackling is a major part of the game. And unlike North American football, this does not mean blocking. Only players with the ball can be tackled. Dangerous tackles are not allowed – this means no tackling around the opponent’s neck or head and no tackling a player when they are in the air. 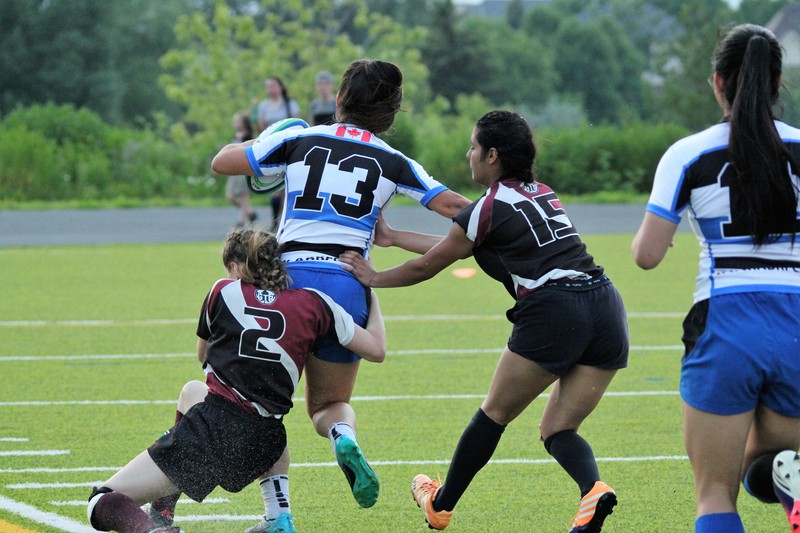 There are different ways that play is restarted depending on what has transpired in the play.

A ruck is formed once the ball is released after a tackle to determine possession again. This often looks a bit frantic with teams forming a tunnel over the ball to gain possession. 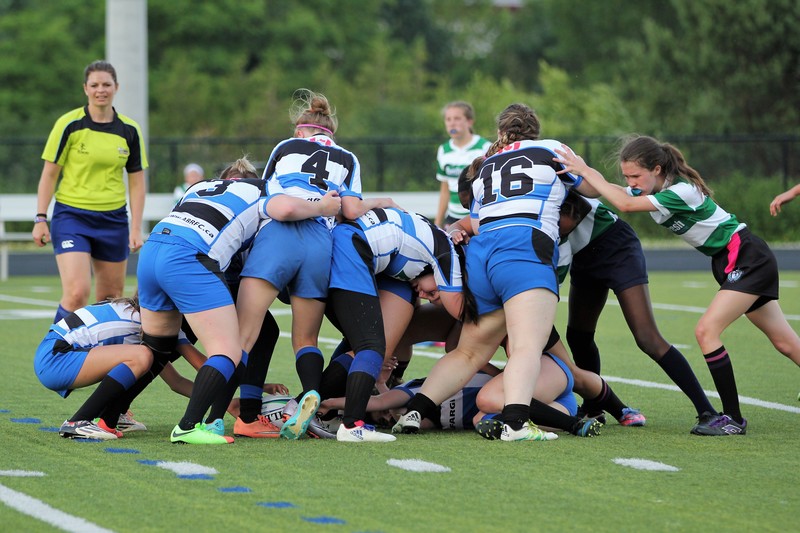 Following a tackle, one or more players from each team, while on their feet, close above the ball – making a tunnel – to compete for possession. The tackled player attempts to roll and shield the ball on the ground in the direction of her team – not using her hands – to give an advantage to maintain possession. Teams compete for the ball using their strength to hold off the other team. Players must only use their feet in the ruck to move the ball down the tunnel while trying to hold off their opponents. When the ball reaches the feet of the last player in the ruck, only then may it be picked up – usually by the scrum half who passes to a back and play continues.

In a ruck, possession is won with skill, sheer strength and bulk by protecting the ball and pushing the opposing team away from the ball.

This is a great YouTube clip of a maul by the Penn State women’s rugby team. 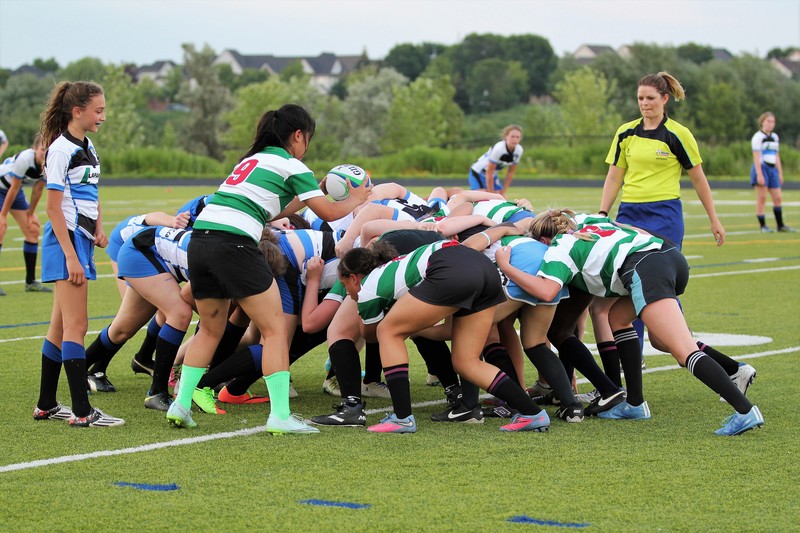 If one team commits a minor infraction – likely a forward pass, a knock-on or if the ball becomes unplayable during a ruck – the other team is awarded a scrum. In a scrum, the forwards from both teams bind arms together in three rows – a row of 3, a row of 4, a row with the last player. All eight forwards are part of the scrum formation – or the pack.

With each team’s forwards bound together and facing each other, the ball is thrown into the scrum by the non-offending team’s scrum half. The hooker (yes, the hooker) attempts to win possession of the ball for her team. The object of the scrum is to use the strength of the forwards to move the ball – using feet only and no hands – to the scrum half who is ready to pass it to a back so play can continue. 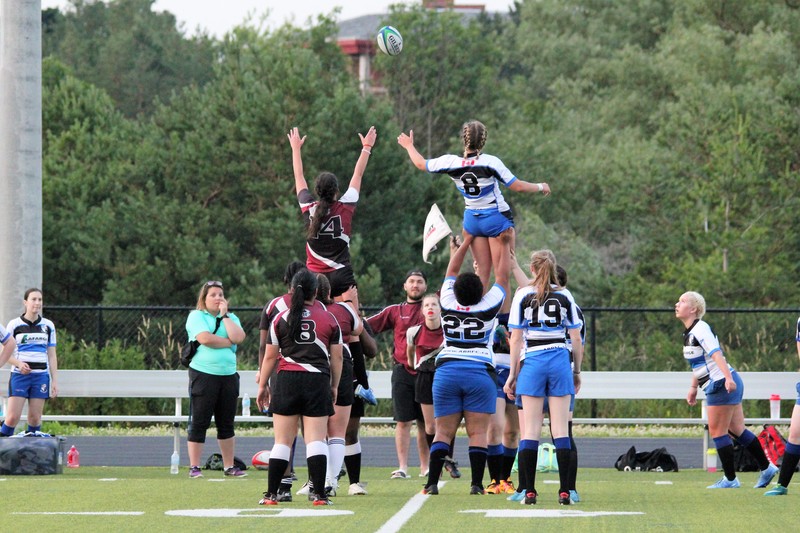 A lineout restarts play when the ball has gone out of bounds. The teams line up side by side with the advantage to the non-offending team who throws the ball in from the sideline. This play involves both teams lifting a player in the air to grab the ball and gain possession of the ball. The lifted player – known as the jumper – who gets the ball then passes to the scrum half and play continues.

Infractions include dropping the ball forward (a knock-on), a forward pass or a penalty. The non-offending team is awarded a scrum or free kick. 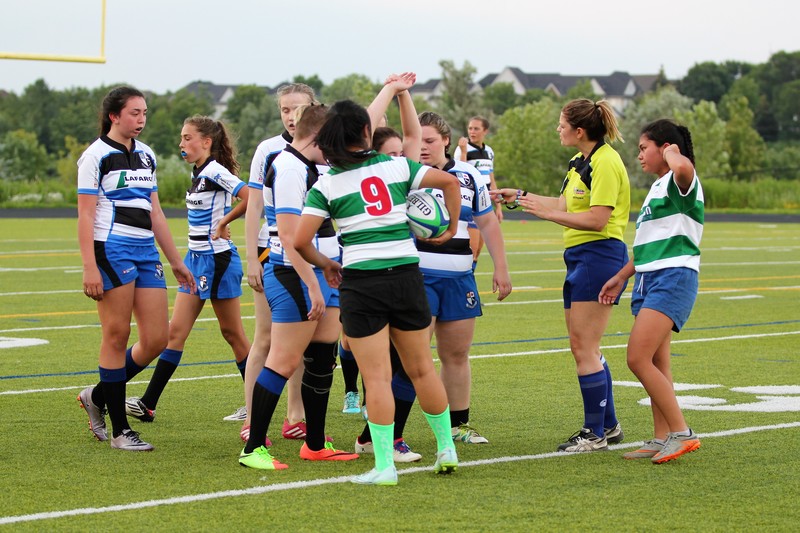 Penalties are for more serious occurrences. Examples include high tackle, leaving feet in ruck, and offside (likely the most common). The non-offending team can choose to take a shot at the goal, kick the ball or tap the ball with their foot and run it.

Parts 1 and 2 are meant to introduce the basic concepts of rugby to a newbie. There is so much more to learn about the intricacies of the game. You will find additional information and more details on game strategies, at either of Rugby Canada: Rugby 101 or World Rugby: A Beginner's Guide to Rugby Union. One more helpful guide is found on the Aurora Barbarian’s website at: Aurora Barbarian’s: A Beginner’s Guide to Rugby Union.

Rugby Canada is the administrative body for rugby in Canada. Rugby Canada oversees the development of the sport in communities across the country and supports elite programs for prospering young players as well. Their website provides information on provincial unions, national teams, competitions, officials, safety, camps and clinics and much more. 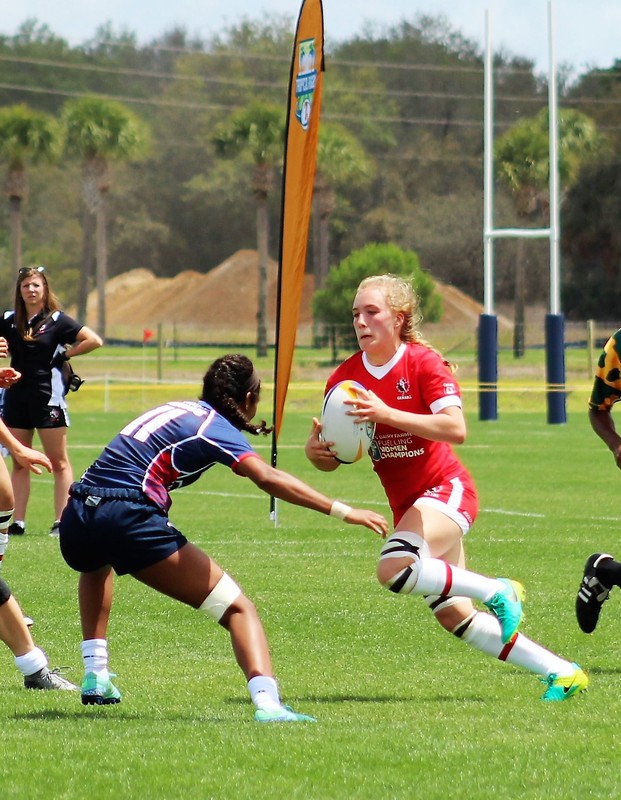 The game of rugby is well represented in each of the ten provincial unions with more and more young girls and women playing across the country. Links to provincial unions can be found on the Rugby Canada site – or by clicking on the province below:

Provincial unions will have information on rugby clubs in your neighbourhood or follow this link on SeeWhatSheCanDo to find a rugby club in your community.

Find, rate and review rugby clubs, local community offerings and businesses that will help you do your thing in our Athlete Advisor, your online athletic business directory.

Explore all things rugby on our Rugby activity page where you'll also find Part 1 of this quick start guide.

Find or start an event or group on our SWSCD Hub.

Do you have a good resource on the basics of rugby or a story about how the light went on for you? Tell us about your experience directly on our Discover blog or by using #seewhatshecando on social media and inspire others to get active.

Photos by Caroline Wiley where not otherwise indicated. Caroline is the Founder of SeeWhatSheCanDo. Her world has always revolved around sport. Caroline's passion is moving, doing and photographing the active moments all around her. When she’s not making plays on the ice or actively exploring the world with her family, she can be found researching her genealogical history and immersing herself in all things Cornish.