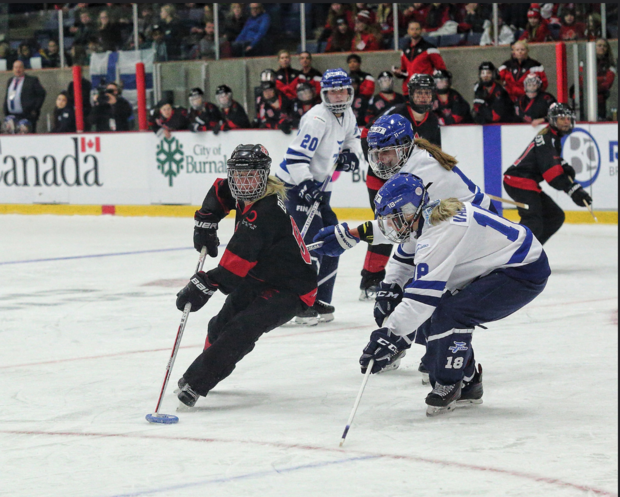 “I had a low start and was missing my rings, but then we got some momentum and our energy kept us in the game,” commented Sara Plouffe following the win. “It really was a team effort and that made it easy to play my game.”

Junior team MVPs for the event were Moncton’s Britney Snowdon for Canada and Minka Tiihonen for Finland. Canada’s Mégane Fortin was named MVP for the Junior Pool.

Going into today’s game down by one, the Canadian senior team put forth a hard-fought battle but were not able to force the best two out of three series to a final game. The defending world champion Finns claimed their seventh consecutive world title, defeating Canada 5-1. Lacombe’s Jamie Bell picked up the lone goal for Canada. Finland’s Anne Pohjola picked up a hat trick and an assist and Susanna Tapani posted two goals and an assist. Whitefish’s Erika Kiviaho picked up the player of the game award for Canada and Maria Perkkola was named player of the game for Finland.

“We knew we had a good team coming into the event, so we were confident,” said Susanna Tapani following the gold-medal win. “The shots were tight and our goalie was very good. We just used our scoring chances better.”

Senior team MVPs for the event were Calgary’s Shaundra Bruvall for Canada and Susanna Tapani for Finland. Finland’s Anne Pohjola was named MVP for the Sam Jacks Pool.

Earlier in the day, USA downed Czech Republic 9-6 to move into tomorrow’s Presidents’ Pool final against Sweden. Czech Republic go home with bronze. USA and Sweden will play for gold at 9:40am (PST).

Complete stats can be found within our stats system: http://bit.ly/2Qk7H66

Competition continues tomorrow, December 1, with the following game taking place (all times PST and all games played at the Bill Copeland Sports Centre in Burnaby, BC):
Presidents’ Pool gold game:
9:40 USA vs. Sweden

About Ringette
Ringette is a Canadian sport that was invented in 1963 in North Bay, Ontario by the late Sam Jacks. There are currently nearly 32,000 players on nearly 2,000 teams across Canada, with over 1,500 officials and nearly 8000 coaches. Internationally, it is played in more than a half a dozen other countries around the world. Ringette has been designated a Heritage Sport by Sport Canada and as part of the Sport for Life movement, ringette is well advanced at adapting Sport Canada’s Long Term Athlete Development model. For more information, please refer to the Ringette Canada Web site at www.ringette.ca.

Check out the SWSCD Athlete Advisor, your online athletic business directory. Find, rate, and review programs, local community offerings, and businesses that will help you do your thing.

Start a group around a physical activity in your neighbourhood. Explore events. Check out our SWSCD Hub.

Look for stories, businesses and more on our Ringette activity page.

Tell us about your favourite way to get yourself moving. Share your highlights directly on our Discover blog or by using #seewhatshecando on social media and inspire others to get active.