Women Stepping Up. Lest We Forget. 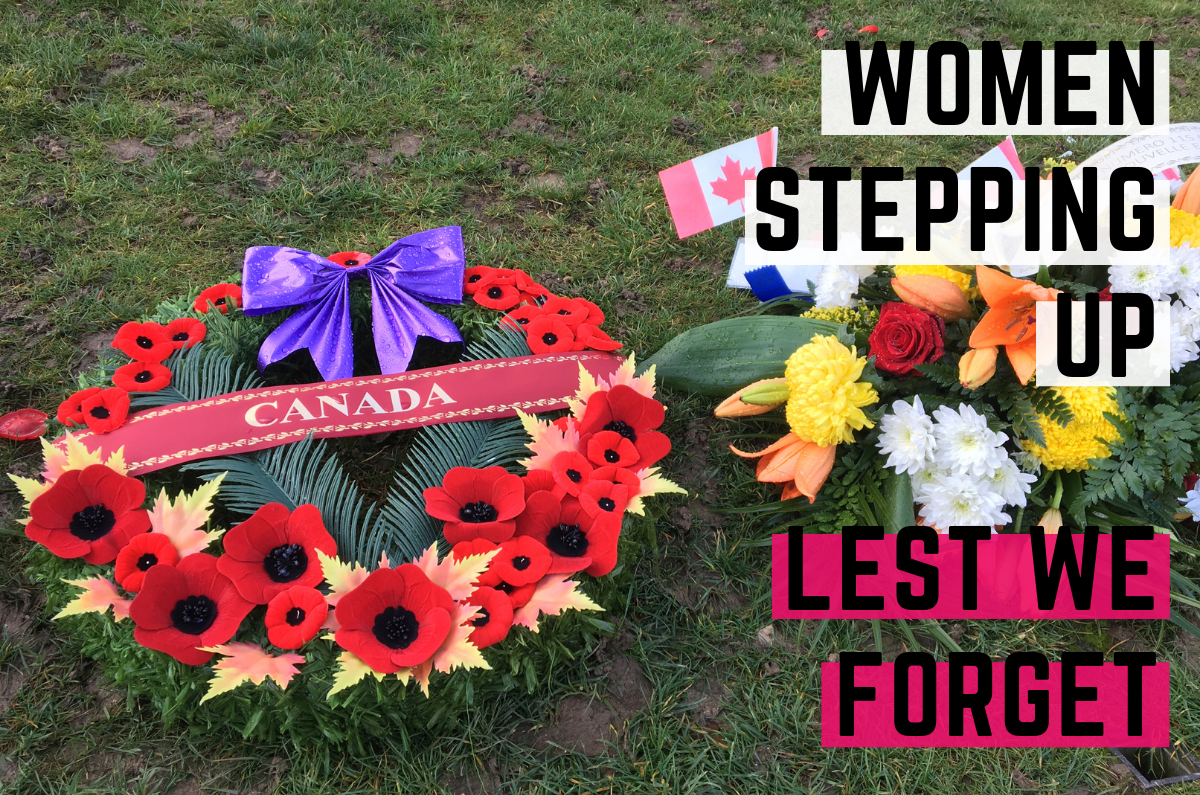 In flanders fields the poppies blow

Between the crosses, row on row.

Every year, I hear this string of words, the beautiful opening to the poem, Flanders Fields by Lieutenant Colonel John McCrae, a symbol of Remembrance Day.

Remembrance day, is a memorial day which takes place on November 11th every year. It was originally established in 1919 as Armistice Day after the First World War.

Each year on the eleventh hour of the eleventh day of the eleventh month Canadians gather to stand in silence and honour members of the armed service. With a variety of ceremonies held at schools, work places, in communities or virtually, people across the country purchase and wear poppies, the flower that grew in the battlefields after WWI, to commemorate the fallen.

Remembrance Day is ingrained in Canadian culture, rightly so, for the sacrifice given by those before us. But so often, the world soldier is associated with a man. It is important to acknowledge that lest we forget also applies to all the strong females who were at war or those who stepped up and out of their daily routines to keep the status quo on the home front. Today I want to share more about these heroes.

In the second world war, women really stepped up to the plate. Both figuratively, to do the jobs of men who left for battle, and literally to save the game of baseball.

Women worked in factories, farms, built parts needed overseas for airplanes and ammunition, and contributed to transportation labour as well. All jobs that seem so common for Canadian women now in 2021, but in the early 40s was a first! And the change was massive! During the war, the number of women holding permanent jobs doubled from 600,000 to 1,200,000.

Have you ever watched the movie A League of Their Own? It is a fictional story based on the real women's baseball league that was created to fill a sports entertainment gap that appeared during the second world war. The AAGPBL was inaugurated in 1943, with the need for more recreational activities in towns busy with war defense work sparking the idea. The women played in skirts and it was referred to as the “lipstick league” but regardless it provided an opportunity. An opportunity for strong, determined, athletic women to push the boundaries of femininity and the inclusivity of sport while improving the morale of those in Canada and the USA. As a female athlete who has always felt welcomed by the sporting world, I have all the women before me to thank, including those who competed in the AAGPBL during such a tumultuous time.

While some women were at home, working in the fields or playing on them, others were overseas at war. In the first world war, women contributed as nurses and were better known as “Nursing Sisters''. This role was also filled in WWII but female participation in the war effort didn’t stop there. In 1941-1942, the Canadian government was pushed to create women’s forces so they could more actively participate in the war.  More than 50,000 women served during WWII between the Army, Air Force and Navy. You can read more here!

So today, a day to remember those who have served for our country, we must honour all of the women, along with the men, who sacrificed everything they had to step up into jobs at home and on the front lines overseas.

With a moment of silence, wearing your poppy proudly and remembering those who came before us, lest we forget.

The Act of Remembrance

They shall grow not old,

as we that are left grow old:

Age shall not weary them,

nor the years condemn.

At the going down of the sun

and in the morning

We will remember them.