Steady Freddy and Me 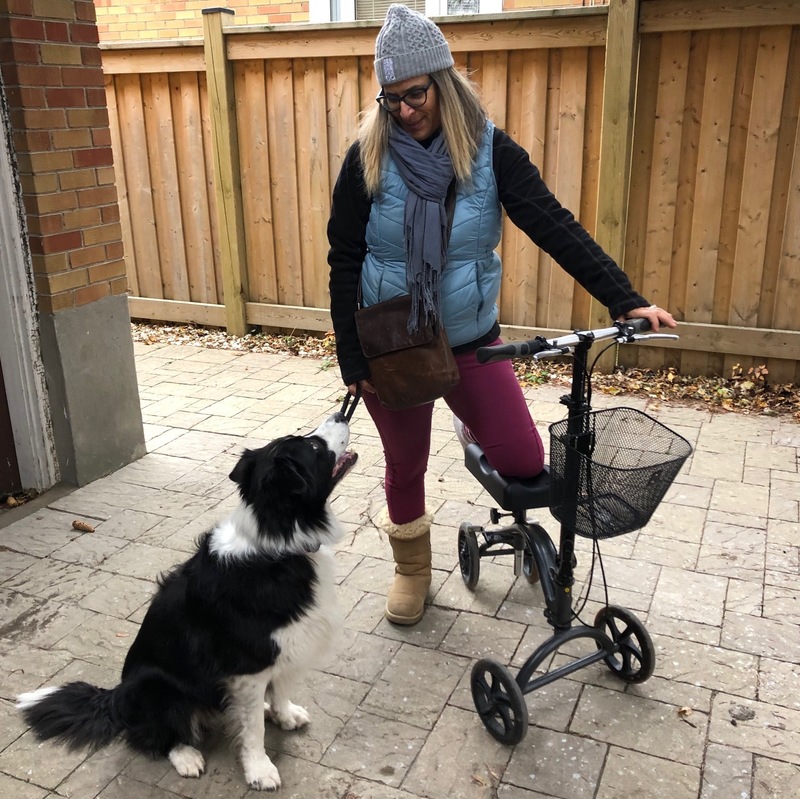 With her 50th birthday around the corner a few years ago, Sherri decided to try and get in better shape than she’d been for years though diet and exercise changes. She cut out most meat, focused on a whole-foods plant-based diet, made weekly yoga a priority, and went on daily long adventurous long walks with her dog Dexter. She lost weight, gained energy, and was feeling great, until "one tiny bad decision" that derailed Sherri's carefully laid out plans to live a healthier and more active lifestyle.

Sherri's story is one of resilience. Of falling (literally), getting back up, and making the best of her new normal. We thoroughly enjoyed it and know you will too.

We’re big Toronto Raptors fans in my house, so when I brought home my mobility scooter rental a week after breaking my ankle I was so grateful I gave it a name: “Steady Freddy” after Raptor point guard Fred Van Vleet. 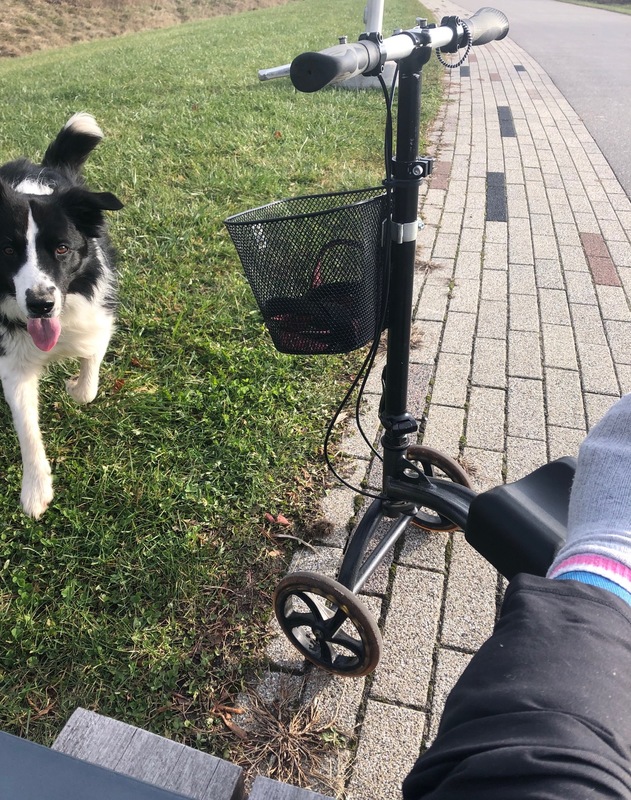 I’d been falling on my face at least once a day on crutches my first week with a cast and had quite enough. I’d never broken a bone before, and at 54 although I’m fairly healthy, I’m one of those women in yoga class who can’t hold a one-legged tree pose. So I guess it’s a balance thing.

All it took was one tiny bad decision. While walking my dog Dexter in the ravine in late October, I came across a wooden pallet on the trail and stepped on it without testing if it was stable (it was not). The pallet - and my left foot - shifted sideways, I heard an alarmingly loud ‘SNAP’, and I was down for the count. I quickly realized there was no way I could get up, never mind attempting to hop back to my car through the woods. With Dexter barking and running circles around me (as border collies do) I was luckily able to call my husband Bob to come and get us out of there.

As I was lying there waiting for help I thought I'd take a pic.... 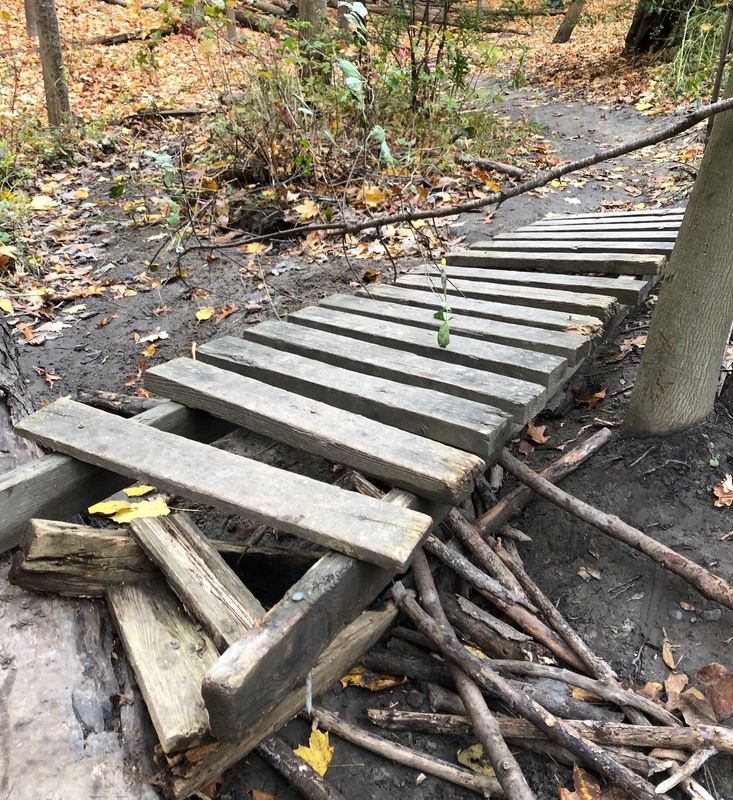 The “cavalry” coming to the rescue (my husband Bob getting as close as possible to limit my hopping all the way to the car… this is not a paved path). 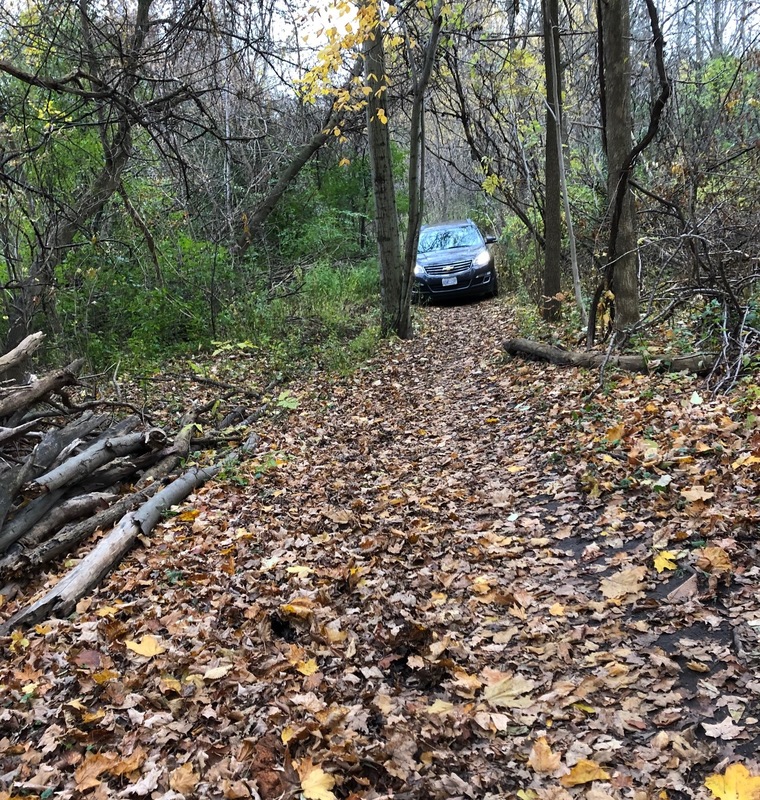 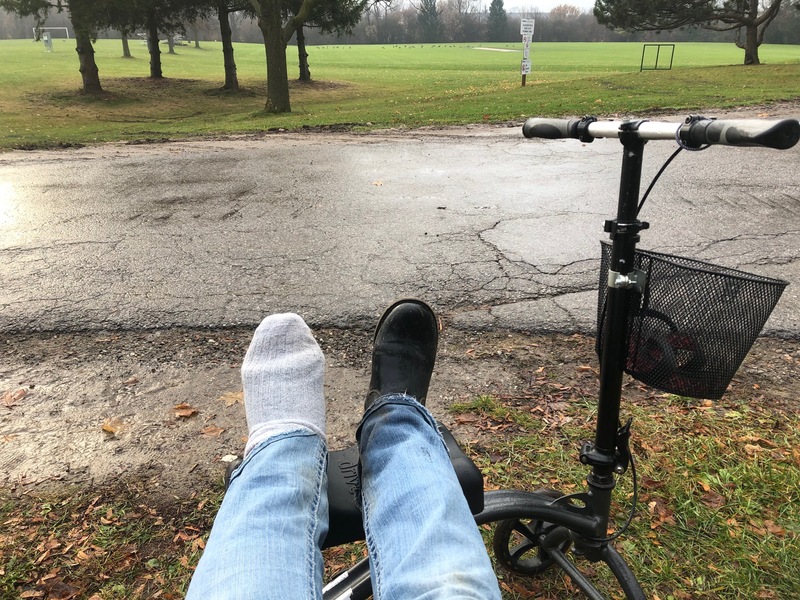 I must say there have been some unexpected positives to breaking my ankle:

Gratefulness. “Better now than in 20 years” I’ve been saying since this happened. If it’s hard in your 50s - I can only imagine what this is like in your 70s or 80s.

Empathy for accessibility barriers. I’ve also become hyper-aware of accessibility issues and barriers like stairs, and cracked, uneven or slippery pavement. I have so much empathy for people using wheelchairs and other mobility devices to get around, especially in the winter.

Making a plan to get back on my feet. From day one, I decided to do everything I possibly could to get back on my feet as fast as I can. I Googled it. I sent my husband on excursions for leafy green veggies, vitamin D and calcium supplements to speed up healing. I get enough sleep. I try to exercise. As I don’t know if someone else’s ankle would have broken in the same circumstances or if there is any osteoporosis involved - I’ve booked my first bone density test. 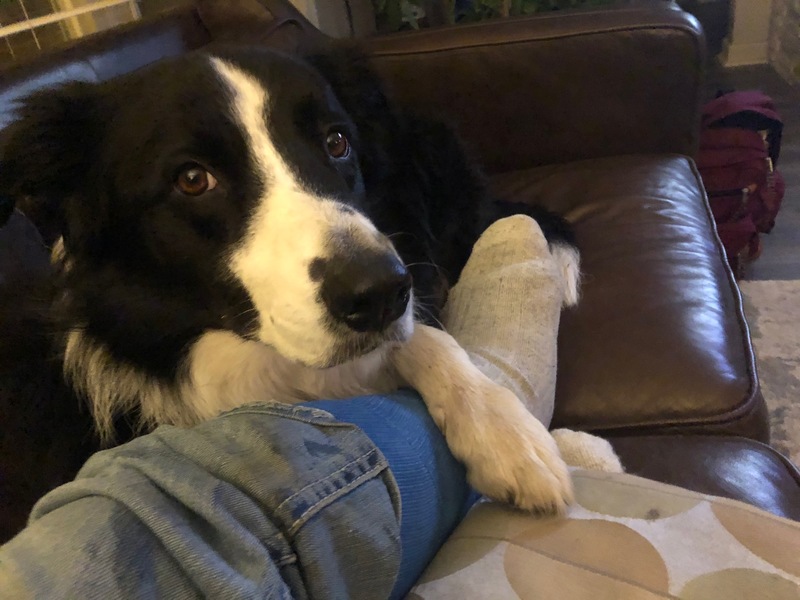 We caught up with Sherri at a charity event in North Toronto last week. We experienced first hand the amazing benefits of a mobility scooter. Can she ever motor on her Steady Freddy! She has since had her cast removed and is working diligently on her rehab exercises.

Sherri is a strategic thinker and creative powerhouse. From branding and graphic design to writing and illustration, she excels at finding creative solutions to communications challenges. Sherri's insatiable curiosity and passion for positive change drew her to collaborate with SeeWhatSheCanDo to make this world of sport more inclusive for women. You'll most often find Sherri exploring Toronto forests with her dog Dexter, traveling to the ends of her imagination with her painting, and changing the world one cause at a time through her creative work.