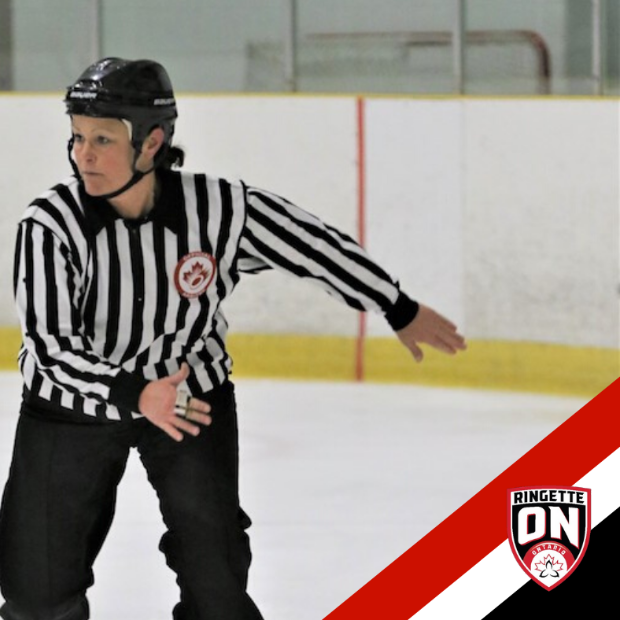 Lindsay and District Sports Hall of Famer, Karen Meek is passionate about nurturing next generation leaders for the sport of ringette.

The SWSCD team caught up with Karen at the Richmond Hill Ringette Association’s 2020 Lightning Tournament, to learn what it takes to be an official for the fastest game on ice.

Hey Karen, can you tell me how you got your start in sport overall?

Well I have two brothers, and they were both involved in hockey, baseball and whatnot. I figure skated for years in Little Britain as a child, then started to play ringette when I was 10 years-old once a girl's ringette team was established in Oakwood in Mariposa Township. Then when I was 12, I started reffing (refereeing).

You've been playing ringette for a long time. What is it about the sport that has kept you going?

I love ringette because of the team aspect of the sport which makes players work together. I also love the competitive aspect and the speed of ringette - that's why they call it the fastest game on ice.

Were there any other girls when you started reffing at 12?

Yes! A couple of my friends on my team reffed, and we came up through the system together. There were probably about equal boys and girls at the time, but I’m finding now we’re starting to get more females involved with officiating.

Why do you think that is?

I think girls are starting to see that they can play and referee at the same time. So, you’ll get some of them coming to tournaments like this and they play a few games then in between they may ref a few games as well. Anyone interested in becoming an official can visit the Ringette Ontario website for more information.

That’s awesome! So why do you think it's important to have women in leadership roles, whether that’s on the ice or off the ice, for our girls?

Well I think it is important, especially in ringette, because ringette is a female sport. I know they’re trying to make it a bit more inclusive by adding boys, but I think it is important that we have a lot of the female officials officiating the higher up games and the bigger games. I think it’s important for the girls to see that there is an alternate avenue. It’s not just about playing or coaching, they can move into this role too. Once they’re finished playing and they don’t want to do that anymore, there is a place for them to stay in the sport.

How does a referee advance in an officiating job?

It’s a lifelong thing. We have tons of clinics and evaluations throughout. At lots of these tournaments there are huge platforms to watch games on both sides or at game level, so we often have evaluators on the sides and supervisors at all the games, so our officials are getting feedback constantly. 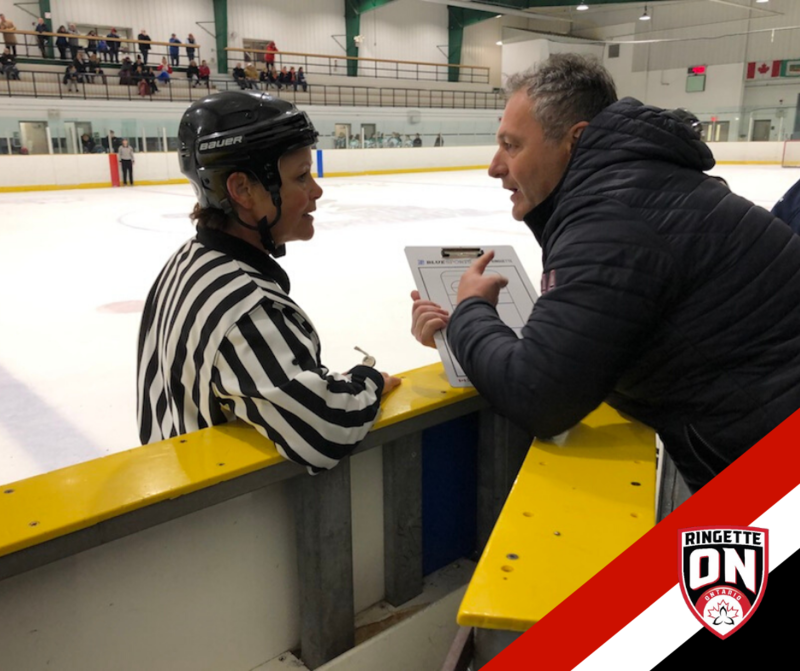 And they’re getting feedback on the ice?

Yes. So, the game I just came off of, the young lad there is from New Brunswick, he’s only 17. I worked with him on the ice and then there were two supervisors watching our game and giving him feedback at the end of the game. So, its teaching him, and its coast to coast.

So, your mentoring and the ringette programs is that done through Ringette Canada, or Ringette Ontario?

I was the chair of Ringette Ontario for years. And I’ve worked with that program for probably 20 years. Right now, I work with Ringette Canada on the officiating development committee for them. For me it’s about watching the development happen. It’s my passion.

So, Gerald Lamoureux (head coach provincial level teams and provincial referee), said you’re the best referee in Canada. So, tell me, what makes a great ref?

(blushing) I think it’s someone who has passion for the game.

So, do you have family in the sport?

My partner plays. She’s played on the national ringette team for years.

Do you officiate her?

No, it’s a declared conflict of interest, so I just watch.

Do you play any other sports?

No, ringette is it.

Thank you for your time, and do you have any advice to give to women who are looking to try ringette, officiate or just be active?

Personally, I just love the challenge of ringette. It’s mentally and physically challenging but you build lifelong friendships!

So just go out and do it!