From Sisters to Teammates, and Now Best Friends 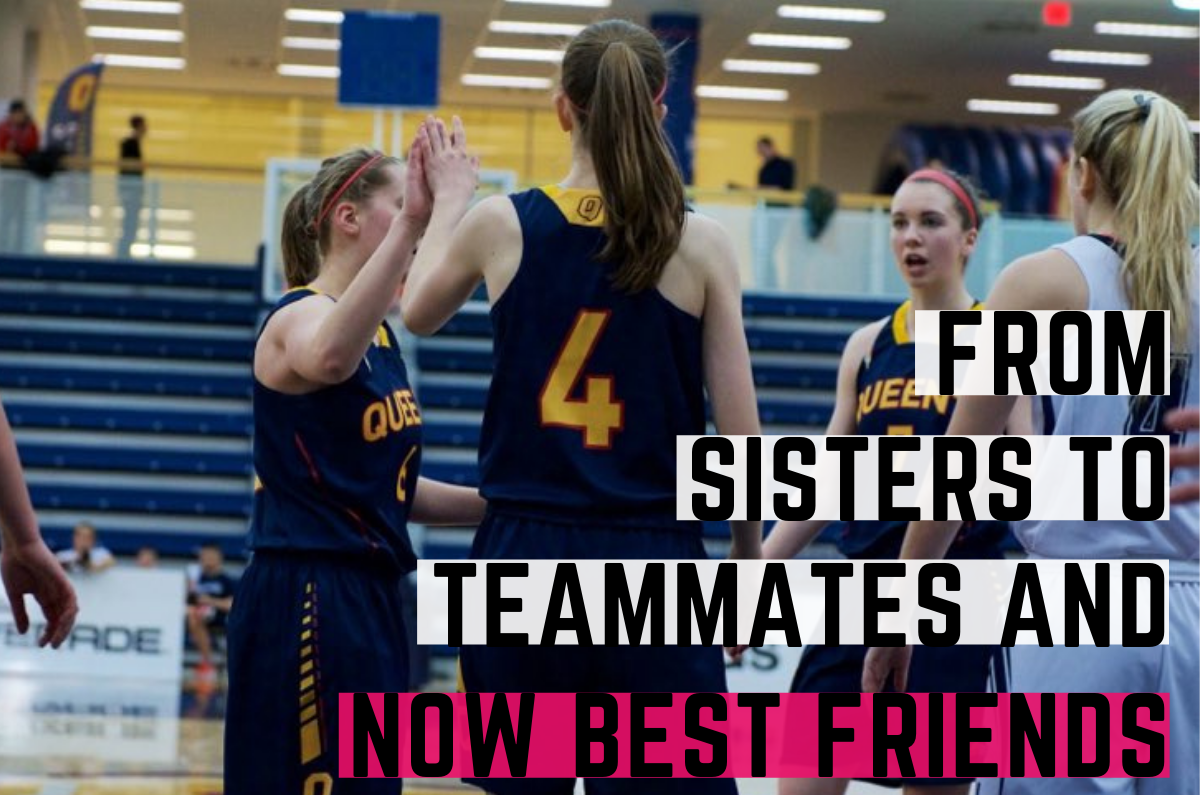 Family. Whether you’re born into it or have friends that turn into it, family is a common theme during the holidays. It is time to celebrate with loved ones, reflect on the year and be grateful. For myself, over the holidays is when my sister visits home and I am lucky to spend some well overdue quality time with her!

My sister, Megan, is two years younger than myself and is currently completing her Masters in Biomechanical Engineering at Queen’s. I know what you’re thinking… firstly, what is biomechanical engineering, and secondly, WOAH! Woah is exactly how I feel when I think about my sister, along with an admiration for the optimistic, driven, intelligent, caring woman she has become.

Sibling relationships can be complicated, but ours is simple. And really it's all thanks to sport.

Sport has always been a shared interest, but it also allowed us to forge our own paths. It has been a place to learn from and respect each other's strengths, find inspiration and celebrate our successes. But, by far the best part of both of our athletic careers was sharing a court together at Queen’s.

Surprisingly, Megan and I had never really talked about how sport influenced our dynamic as sisters. So this week I gave her a call, and that is exactly what we did.

Let’s click rewind, waaay back to the early 2000s. As you may remember from my Mother’s Day blog, my mom followed the lead of other parents and enrolled me into several sports as a kid. When I was about 6 or 7, I did gymnastics, dance and soccer. Then as I grew, I tried curling basketball and so on.

What I hadn’t realized is that Megan was doing all these same activities, but she got started two years younger…lucky! In Megan’s words our “mom had figured it out by then.” I was essentially the “practice kid”.

“My first memory of playing a sport was when I was probably around 4 years old,” Megan mentions. “I played Timbits soccer in a yellow uniform with my hair in pigtails.” And let me tell you, she was cute as a button.

Of course our parents held the key in determining what sports we played and how we learned to take winning with grace and losses as learnings. Megan said she remembers our mom always being her loudest cheerleader and supporter on the sideline and our dad being the drive home debrief guy. Breaking down the game more analytically and removing all emotion from it.

But I was curious as to how having an older sister impacted Megan’s sport journey. “Having an older sibling kind of dictated what I did, both the types of sports and the kind of athlete and teammate I was.” Always being referred to by coaches or spectators as the “other Saftich sister” or “baby Saftich” did open a door for comparison and made it hard for Megan to form her own identity in sport. But she also adds that “you were someone to look to, a role model, and you were also a support system. I never felt like you were my competition, rather an inspiration.”

I think, oddly enough, I felt similarly. Megan’s success in sport drove mine but we weren’t competing for the spotlight. In my opinion, the two year age gap allowed for this, we didn’t have the opportunity of playing with or against each other very often.

The first time we did was actually in dance class, which was a fun pastime for Megan and I. We both remember it so clearly, we wore velvet pants and white mesh shirts for our Hip Hop Jazz dance recital. The routine was to Ciara’s Too Legit to Quit, featuring Missy Elliot. Megan recalls.

But aside from our jazz squares we were never really compared. That is until we found ourselves wearing the same gold jerseys and representing the Queen’s Gaels on the basketball court.

I was just finishing up my second year with the squad when my coach pulled me into his office. He asked me how I would feel if Megan joined the team. At that moment I was ecstatic! Since I had moved away from school Megan and I had, ironically, become much closer. It was almost as if we needed some distance and space to truly appreciate each other. So with this in mind I was thrilled - what a unique opportunity to experience some of the best years of our lives together.

Megan was more hesitant to become a Gael. I got to see first hand what it would be like if I went to Queen’s from your experience. I came to visit, stayed in residence, attended training camps and watched your games on weekends. It became a natural, comfortable choice for me. But, I was hesitant. I didn’t want to just follow in your footsteps because it was easy.

I completely understand now how Megan may have felt. Wanting to create her own identity, pave her own path. But I am very grateful that she was able to do that at Queen’s because the three years that we got to play together allowed us to develop a special bond.

We became a lot closer during University, we got to see each other every single day and experience difficult things together, like the physical and mental challenges that come along with varsity sport. The injuries and season ending losses. But, as teammates we also traveled to Barcelona, went to nationals in Victoria and each of us had someone sitting on the bench who cheered a little bit louder when we would make a big defensive play or hit a three.

Sisters and then teammates, who would grow into best friends.

People always ask us now “So who’s better?” We played the same position so it should seem like the answer to that question is cut and dry. But the beautiful thing about sport is how multidimensional it is.

I think we share the same skills on paper but how we each express and produce those are very different. We are both team first individuals. We are both defensive minded and can shoot the three, but physically are complete opposites.

Where Megan is long and and more athletic, I had to leverage my knowledge of the game and strategically figure out where to be on the court so I could be successful. Megan mentions she was a quiet leader, demonstrating the right behaviors, acting as a lighthouse for my teammates. While I was the loud, overcommunciative leader on or off the floor.

That is the beautiful thing about sport. It connects people, even siblings, but also allows individuals to express themselves differently. It is a space where you develop respect for one another and create memories, both painful and jubilant, that stick with you for a lifetime. I can better appreciate my sister’s work ethic, competitive drive, empathetic support, communication, and selfless demeanour because I have seen it first hand.

We created beautiful memories together that we can look back on and three years later, we better understand each other because of what we went through. We will never lose that. No one can take that away from us and it is something only the two of us share.

And as for the question of who’s better? I guess only time will tell…