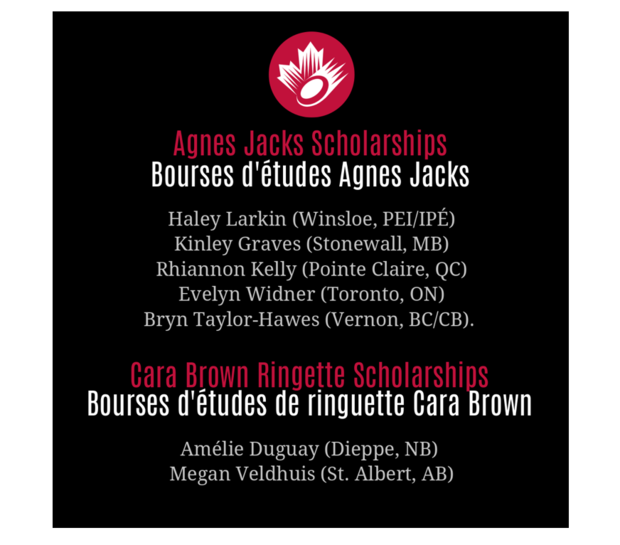 Agnes Jacks, who sadly passed away on April 1, 2005, was the widow of Sam Jacks, who invented the sport of ringette back in 1963 in North Bay, Ontario. While the sport lost Mr. Jacks’ guiding hand through his untimely passing in 1975, the ringette community continued to benefit greatly from Agnes’ dedicated and enthusiastic promotion of the sport, and the ringette community appropriately laid claim to Mrs. Jacks as their very own goodwill ambassador. The Agnes Jacks Scholarship Award is presented to ringette players, coaches and/or officials who have demonstrated a strong academic performance and a commitment to the sport of ringette. Recipients receive a $1,000 scholarship towards post-secondary.

Cara Brown played competitive ringette in Sudbury and Calgary and participated in 17 Canadian ringette championships, as well as serving as team captain at the World ringette championship in 1990, 1992 and 1994. The Cara Brown Ringette Scholarship was originally formed to recognize Cara’s involvement in ringette and is awarded to a registered ringette player who is actively playing ringette at the elite level, who is entering a Canadian university on a full-time basis for the first time, who combines academic excellence and a minimum of a B average with a strong commitment to the sport of ringette. Recipients receive a $1000 scholarship towards post-secondary education.

Ringette is a Canadian sport that was invented in 1963 in North Bay, Ontario by the late Sam Jacks. There are currently over 31,500 players on nearly 2,000 teams across Canada, with over 1,500 officials and nearly 8000 coaches. Internationally, it is played in more than a half a dozen other countries around the world. Ringette has been designated a Heritage Sport by Sport Canada and as part of the Sport for Life movement, ringette is well advanced at adapting Sport Canada's Long Term Athlete Development model. For more information, please refer to the Ringette Canada Web site at www.ringette.ca.