Hello! My name is Joanie Collette and I am here to share my story. I live in a small city called Dieppe in New Brunswick. I am 14 years old, in the 9th grade and I play forward. My best friend from Ontario encouraged me to share my story. So here I go.

I started playing ringette when I was 7 years old. I had already learned to skate when I was a little girl and was very passionate about the sport. As the years went by, I started learning new skills, making new friends and developing an unconditional love for the sport. Last season, I played on U14 Southeast Stingers, which later became Team NB. But last season, I was not an average player with an average story.

On September 7th 2018, I suffered from my first head concussion after an accident that took place at school. I certainly did not think much of it. I kept playing a little bit until I realized it was time to stop. I was slowly healing and starting to get back on the ice at practices with my team, when I unexpectedly, in December, got another hit to the head from Gym class at school. I was healing faster this time and I was able to play with my team at the GCRA tournament in February, where we got the silver medal in the AA division. I was beyond happy to be back on the ice. Unfortunately, right after coming back home in New Brunswick, two other gym class incidents occurred within a 3 week span. I had gotten 4 concussions in under 6 months. I was experiencing severe headaches all the time and I always felt lightheaded and dizzy.

As I have my twin sister on my ringette team, I was still following my team around to games and activities. My teammates helped support me through my tough time. A couple of weeks later, I could see a big improvement in my physical state. I was lined up every week with appointments to different specialists that helped me heal faster so I could get on the ice. I had very high hopes and I was able to play in the New Brunswick play downs. I got to experience my team and I winning the championship and as a result, we would have the chance to represent our province at the Eastern Canadian Ringette Championships (ECRC) in Oshawa. I was extremely relieved to be able to play, but I was still having concussion symptoms every day. I found that playing ringette did not make it worse, so I kept on playing without realizing that I shouldn’t have. I was so caught up with the idea of playing the sport I grew up to love that my headache would go away when I was playing. I loved it so much and it made me so happy.

After impatiently waiting for many weeks, it was finally time to head to Ontario for the ERCR. It was my first time at Easterns and I was enjoying my experience for the first few days. I played our first game and all seemed good. We won and my head wasn’t feeling too bad. I still had off-ice dizziness and little headaches here and there. I did not speak out as I would fear not being able to play. I had already had a very hard year watching all my teammates on the ice playing without me. It did not feel right and I absolutely hated it. The next day, we had another game. Just as the first period was approaching its end, my life came flashing before my eyes. As I was skating around the triangle and coming in the zone with speed, my body went crashing into the defending center. We banged heads and I quickly fell on the ice surface. I had gotten whiplash, noticing something was definitely not right. My first instinct was to lay down on the ice surface, so that’s what I did. Coaches quickly came to help and the tournament medical staff were asked to come take a look. My coaches, knowing I had a concussion history, decided it was a good idea to call an ambulance. I was unaware of what was happening, and my head was constantly pounding. When I arrived at the hospital after the ambulance ride, I was told I had gotten another severe concussion and that I needed to rest. I wasn’t sure if I was going to play ringette ever again. The thought of it scared me. I hated not being able to play. The next tournament days, I stayed in the hotel watching my teammates from the livestream on TV. My symptoms were worse than they had ever been but at least I knew I really had to take some good time off from sports. It hurt but it was my reality. I left the hotel on the last day, watching my team get the bronze medal. I was proud but that was a tournament I will definitely never forget. We drove back home safely and I was back on square one of the concussion protocol. I did not think I would be able to play soccer in the summer, or even play ringette the upcoming season. This summer, I attended a soccer camp, but I was not playing or doing any physical activity. When I was juggling the soccer ball on the last day of the weeklong camp, I received a soccer ball to the head, making it a total of 6 concussions in just under 10 months. I knew it was time to stop. I had went too far and I realized that what I have done wasn’t going to help me in the long term.

Last week marked my 12th month since the first head injury. What happened this past year was a very hard step of my journey that I am still not done overcoming. It has taught me that no matter who you are, no matter where you live or what team you play for, make sure you always enjoy it. Enjoy the sport. Have fun. Have passion. Take advantage of every second you get on the ice. Because you never know what shift might be your last. All I can remember is coming back from the hospital and seeing all my teammates crying, which left me wishing I had done more. Wishing I would have maximized every shift a little more. Because I had no idea that was going to happen that day, and now I don’t know if that was my last shift or not. I’m missing it more every day, that feeling of the sport. It was my life, my passion, my everything.

If there is one thing that everyone reading this could learn today, is to enjoy the sport you truly love, and every moment of it. And make sure to always be aware of your symptoms. One of my coaches used to say, “respect your body”, because it is important. The moment you ignore it, might just be the moment that turns your life around. Sometimes, what happens can be out of your control. What is in your control is how you deal with it. Your well being should always come first.

My name is Joanie Collette, and that was my story. 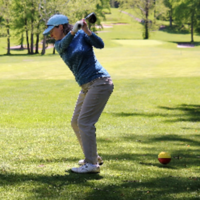 Please let us know why you believe this item is in violation of our Terms of Use. We'll investigate and take action as necessary.

Please let us know why you believe this item is in violation of our Terms of Use. We'll investigate and take action as necessary.

Thanks for sharing your story Joanie! We’re sure your story will help many more people become more aware of concussion safety and why its important to respect your body and heal fully after an injury (as hard as it is to do!)